A fatal case of cryoglobulinemic vasculitis

A 90-year-old male patient presented to the emergency department in December 2018 with a rash on his chest present for 10 months. He also had noticed a rash on both lower limbs present for 4 days. He also was complaining of progressive discolouration of his toes bilaterally and severe pain in both feet.
There was associated weight loss of 3 stone over a period of 10 months. Of note he also had an episode of epistaxis on the day of presentation.

He denied haematuria, haemoptysis, arthralgia or joint swelling. His past medical history was significant for advanced chronic lymphocytic leukaemia, for which he had never received any systemic treatment.

He was seen by the rheumatology consult service and the following were noted.
On physical examination, there was bilateral above knee palpable maculopapular rash, conjunctival hyperemia, erythroderma over the abdomen and back, nailfold infarcts were noted as well as painful discoloured and necrotic toes. Cardiovascular, respiratory and gastrointestinal examinations were unremarkable. Musculoskeletal examination did not reveal any tender joints and no synovitis.

Our impression was likely cryoglobulinemic vasculitis secondary to his underlying haematological malignancy.
He was started on IV methylprednisolone followed by oral steroids. He then received a first cycle of rituximab however his general state rapidly deteriorated and he eventually passed away after spending 19 days in hospital.

The treatment of cryoglobulinemic vasculitis must be individualized according to the underlying disorder and upon the severity and nature of involvement. In severe systemic disease, patients are treated aggressively with high dose steroids; immunosuppressants and/or plasmapharesis. The prognosis is usually poor with significant morbidity and mortality. The worst prognositic factors are advanced age (>60 years) and renal involvement. 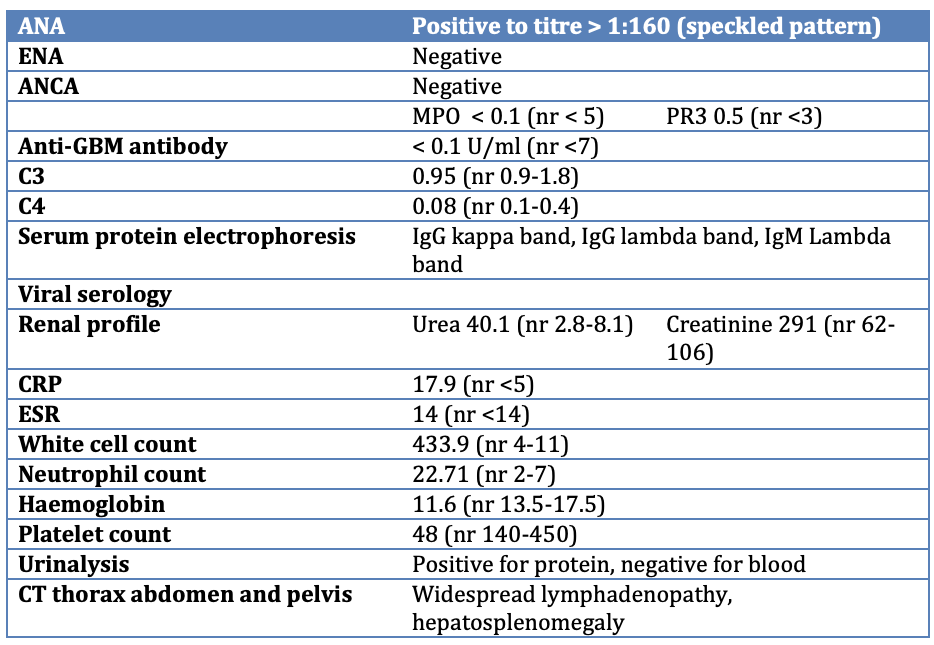