Gout is an inflammatory arthropathy associated with long-standing hyperuricemia. The first metatarsophalangeal joint is the most commonly involved joint, although gout is often polyarticular. Involvement of tendons has been described, but is rare. We report a case of gout involving the inferior portion of the patellar tendon.

A 50 years male presented to the Rheumatology emergency clinic with severe right knee pain, unable to weight bear. He had been recently diagnosed with Sero negative Inflammatory Arthritis and treated with Methotrexate for 4 months. He had presented one week previously to the general medical team on call with similar but less severe pain. He was discharged on steroids, which were of no significant benefit. On examination his right knee was extremely tender, slightly erythematous with increased local temperature. There was no joint involved and there were no tophi. Joint aspiration was attempted but there was no fluid. He was admitted with query Septic arthritis and started on intravenous antibiotics. Uric acid level was 583. He was taken to theatre by the orthopaedic team. USG of the knee showed small fluid in the pre patellar bursa. Aspirate was negative for crystals and there was no growth on Cultures. He ultimately had an MRI of his right knee which showed significant soft tissue oedema and abnormality in the patellar tendon(image 1). Targeted USG of the knee done by a consultant rheumatologist showed significant changes in the inferior portion of the patellar tendon consistent with infiltration. The external tendon boundaries were normal. It was thought to be likely that these represented gouty tophi (Image 2). He went on to have a patellar tendon biopsy which has shown changes consistent with gout.
He was started on Colchicine 0.5mg bd leaving the hospital and Allopurinol was started two weeks later.

He was seen in the clinic as follow up with complete resolution of his pain. Methotrexate was stopped. He has reported no flares and allopurinol is being titrated up to achieve serum uric acid concentration <300u/l.

This case report is to highlight the rare presentation of gout. 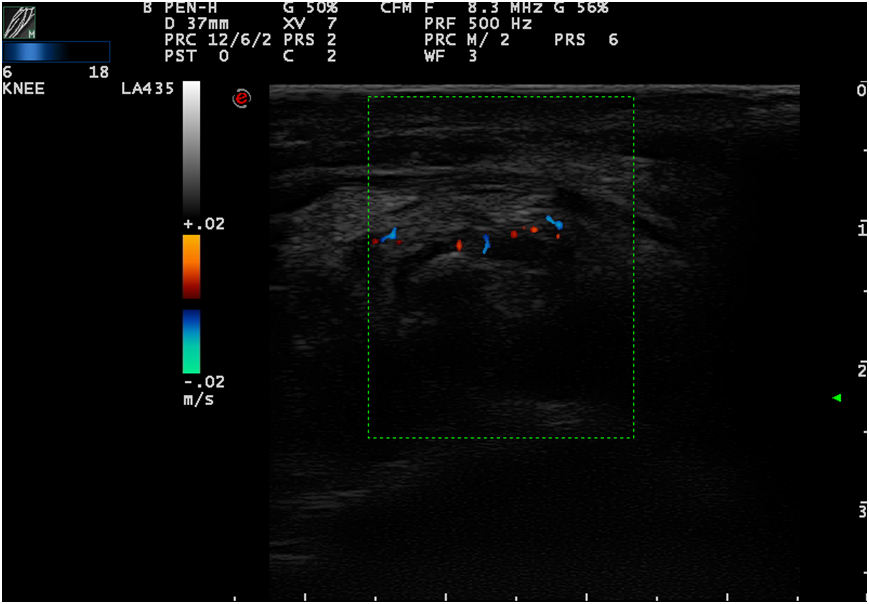