Women with axial spondyloarthritis (axSpA) are often affected by the disease during their reproductive years, but reports on disease activity and pregnancy outcomes in these patients (pts) are sparse. In women with ankylosing spondylitis (AS), also currently termed as radiographic axSpA, a higher risk of disease activity flares and prevalence of adverse pregnancy outcomes have been reported vs healthy controls; however, in non-radiographic (nr)-axSpA pts, such data are virtually non-existent.

To review available evidence on the relationship between axSpA disease activity and pregnancy, including foetal outcomes.

A systematic literature review was conducted in October 2017 by searching EMBASE, MEDLINE®, the Cochrane Database of Systematic Reviews, and the Database of Abstracts of Reviews of Effects. Publications were systematically screened for English language articles on observational studies of axSpA pts reporting pregnancy outcomes or disease activity during pregnancy. Studies utilising agents contraindicated in pregnancy were excluded. Supplementary searches of selected, 2016–17 conference proceedings and bibliographies of relevant review articles were also conducted.

Robust, prospective data on disease activity during pregnancies of women with axSpA are limited. Within the samples reported here, available data suggest that there may be a small increase in pre-term births; no signal for increased pregnancy loss was detected. Further research is needed to investigate relationships between maternal disease activity and pregnancy outcomes in axSpA. 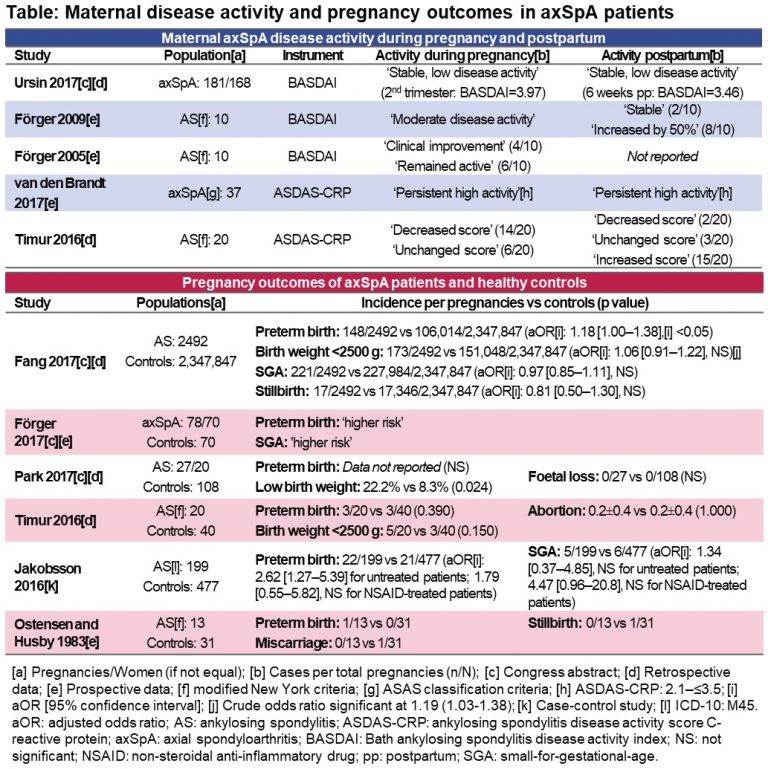